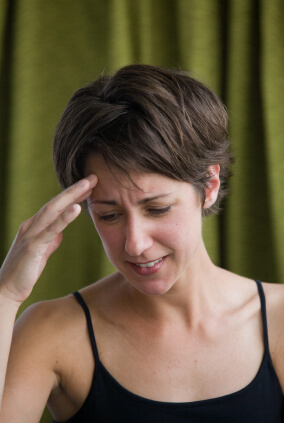 Migraines: Not your ordinary headache ...

I never had migraines until last summer. After a particularly stressful series of events one day, this blinding, throbbing pain began tormenting me.

I took three Excedrin, crawled into bed, turned out the lights, and covered my forehead and eyes with a cold wet cloth. A few hours later, the pain had faded enough to allow me to get vertical again. It happened two more times last fall, each incident separated by a few months.

Then last week, my eleven-year-old daughter, in obvious distress, began reciting an all-too-familiar list of symptoms—her head hurt, she felt sick to her stomach, light hurt her eyes, and sounds were too loud.

Before these personal experiences, I didn’t really give much thought to migraines as a source of chronic pain, I confess. Now, I’m in tiger mama mode, researching juvenile migraines and scheduling a visit to my daughter’s doctor.

(There’s another post for another day: why do we race into overdrive when it’s our family members in pain, but we often put up with our own pain?)

And that’s how I found this piece from MSNBC.com: “Ultra flexible? You’re at triple risk for migraines” (Reuters). It reports on a recent study performed by Dr. Vincent Martin, professor at Ohio’s University of Cincinnati College of Medicine, which showed that women with joint hypermobility syndrome are up to three times more likely to experience migraines than their less flexible counterparts.

Joint hypermobility syndrome isn’t really a pain condition—it normally requires no treatment. (A more severe form called Ehlers-Danlos syndrome is a whole ‘nother kettle of fish.) But it can be an indicator of what Martin calls “stacks” of other medical conditions that do cause pain, such as fibromyalgia, chronic neck pain, and sleep disturbances—and, apparently, migraines.

Martin’s working hypothesis was that JHMS, marked by “extra-stretchy” collagen in joints, could also be an indicator for increased risk of migraines. This is because the collagen (a crucial component in body structures like joints and blood vessels) should be overly elastic throughout the body. And if that’s true, the collagen in the blood vessels would also be overly elastic—and that, researchers already believed, is associated with chronic migraines.

Martin expected an increased risk but the actual results surprised him. The rate of migraine occurrence in the control group was 43%, but in the test group, the rate shot up to 75%. After factoring in age and medication usage, this figure translated to three times the risk for migraines for women with joint hypermobility syndrome, who also experienced migraines more than twice as often, with an increased occurrence of aura.

Researchers had long suspected a link between JHMS and migraines. Dr. Blair Grubb, a professor at the University of Toledo Medical Center, said “It’s one of those things where everybody knew it, and somebody just got around to publishing it.”

Of course, as we know, that “publishing” part is pretty critical in order to support further studies and advances in treatment.

Do you have migraines? Tell me what you do to make yourself feel better in the comments!

I’m especially interested in hearing from moms of young children who experience migraines. I got a few great tips from Twitter the other day (I’ll be asking Princess’s doc about Maxalt, and we’re looking into nutritional changes as well—thanks, tweeps!) but information is power, Dolls, so let’s share!

6 thoughts on “Link Between Ultra-Flexibility and Migraines Discovered”