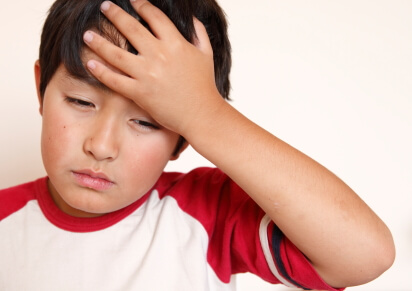 Bad news, parents: chronic pain in kids turns out to be more prevalent than was previously assumed Worse yet? The numbers of kids reporting chronic pain are increasing.

A recent study was published in the December 2011 journal Pain by Dr. Carl L. von Baeyer of the University of Saskatchewan’s Department of Psychology that looked at several surveys of reported chronic pain in children. (See “Interpreting the high prevalance of pediatric chronic pain revealed in community surveys” abstract.)

Examining the results of over 40 child pain studies from 1991 to the present, the researchers found that girls experience more chronic pain conditions than boys, and as affected children grow older, the pain tends to increase.

The most common kind of pediatric chronic pain? Headaches (23 percent of kids aged 7 to 18), but abdominal, back and muscle pain were also common.

“(R)esults of this review indicate that persistent and recurrent chronic pain is overwhelmingly prevalent in children and adolescents and should be recognized as a major health concern in this population.”

When Did Your Chronic Pain Really Begin?

Officially, I was diagnosed with degenerative disk disease and worsening scoliosis in November 1999, and with fibromyalgia in February 2000. Yet, I remember quite vividly several episodes of pain in my adolescence that felt an awful lot like the fibromyalgia flare-ups I periodically experience now. The deep-seated ache, especially on the tops of my shoulders and in my lower back and hips, is pretty unmistakeable, even 30-odd years later.

At the time, of course, my mother and I were told it was “growing pains.” At 5’10” I’d obviously done quite a bit of growing, but growing up shouldn’t hurt.

I know that now of course … but at the time? It seemed reasonable to a teenager, especially one who spent almost every day in dance class or theater rehearsals.

I didn’t really put it together at the time. It took my late mom’s revelation, four years past diagnosis, that she too had been diagnosed with fibromyalgia to trigger my memories. Thinking about a potential genetic link had my mind wandering over the history of my life with my mom, and her mother as well, looking for clues.

And that’s when the memories came: moments of such deep and bone-crushing fatigue that I could barely get to the bed, moments of intense flu-like pain that wouldn’t let me get out of bed …

Did I have fibromyalgia as a child? I’ll never know for sure. It seems more than possible in hindsight, but short of a time machine, there’s not much available to me now that can confirm it.

So when did your chronic pain really begin? And for the moms and dads out there, are you worried about your kids “inheriting” your condition? Share your experiences below!

One thought on “Have You Checked the Children? Pediatric Chronic Pain More Prevalent Than Previously Thought”