As many know by now, I spent New Year’s weekend moving from North Myrtle Beach, South Carolina, to Salisbury, North Carolina, with my daughter and her kitten. As I expected, the physical and mental stress of this move triggered a fibromyalgia flare-up, and I thusly tweeted: 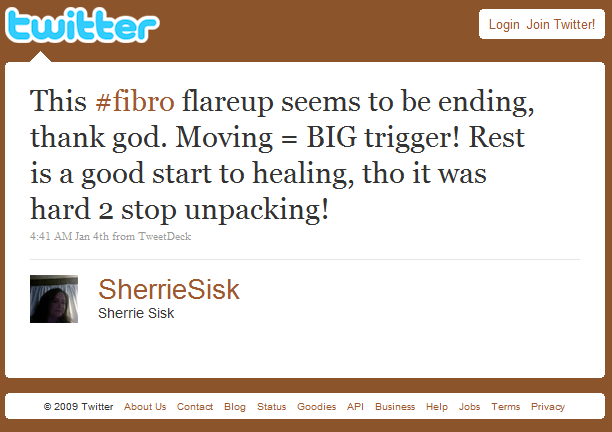 As they do, my #fibro-tweeps sent me some virtual hugs and support, and this one in particular caught my eye: 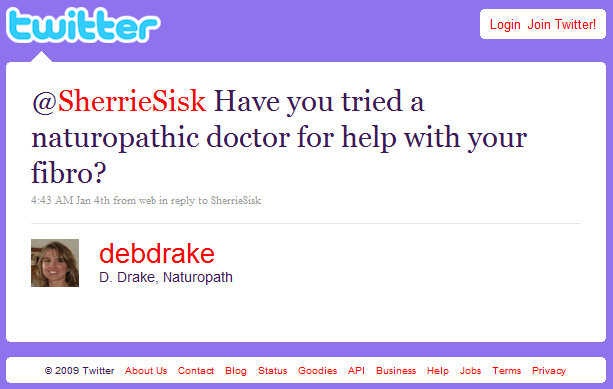 Then @DebDrake kindly shared a link to a list of her recommendations for fibromites from her website. (Deb’s bio on Twitter reads: “I’m a Naturopath, nutritionist & CNHP. I’ve had fibromyalgia for a decade and I am beating it with nutrition and lifestyle.”)

I don’t know what it was about the situation that prompted me to engage Deb but I did, and below, you’ll find what transpired over the next few days between us. Collectively, these tweets represent an interesting debate about alternative medicine versus pain medication for the treatment of fibromyalgia.

So I asked Deb if she’d mind if I shared the conversation with my readers. She graciously agreed, although she was concerned that I wouldn’t bash alternative medicine in general or specifically with respect to fibromyalgia. I promised I would (A) give equal time; (B) represent the conversation faithfully; and (C) share my opinion truthfully.

And that’s what I’m about to do.

The Twitter Conversation: @DebDrake and @SherrieSisk on Alternative Treatments vs. Pain Medication for Fibromyalgia

@DebDrake Alt therapies didn’t work for me. I’m glad they work for someone but my open-mindedness turned to disbelief after my experience.:)

@SherrieSisk I’m sorry to hear that. It is true that disease = constitution+environment & the remedy must treat both. No remedy works 4 all

@SherrieSisk Dont give up on nature tho. The body has the ability to heal if you give it the tools. minerals help the most -mostly magnesium

@SherrieSisk Many do just the opposite: give up on meds bc of side effects & not working.That was me-In pain 5yrs going to drs. never helped

@debdrake Magnesium did absolutely nothing for me. Tramadol, however, works great. Side FX minimal if taken properly, uptitrated slowly

@debdrake Not anti-anything that works for the individual. Just sick and tired of #fibro patients talked out of trying medication b/c of…

Deb next offered the following thoughts:

@SherrieSisk Magnesium by itself helped but not enough. It does pretty good when mixed w CoQ10 and malic acid.

@SherrieSisk But still, fighting fibromyalgia requires a combination of things to do. It was caused by any one thing. A change in lifestyle.

@SherrieSisk Natural remedies dont work the same way medications do. They help build the body up rather than undo a symptom. Symptoms=alarm.

@SherrieSisk So sometimes meds are good. They turn off the alarm & stop pain. but now something must change or damage is still being done.

@SherrieSisk I guess I just think that everything, even herbs, should only be temporary fixes. Herbs for example help the body rebuild.

@SherrieSisk There are a few things we need ongoing since food is deplete. A good multi, omega3, antioxidants, minerals, probiotics, enzymes

@debdrake It’d be great if that worked for everyone. You can read more abt my 10yr exprnc w/ #fibro at my site – but briefly …

@debdrake … I’ve tried many nutrtl supps – some made slight difference, most made none (incl CoQ10, malic acid and Mg). I just can’t …

@debdrake … agree that meds are not best treatment option, ever, for anyone. There is no one-size-fits all solution, until there’s a cure

@debdrake Basically: I’m a big believer in better living thru chemistry, until they come up with a cure, and strongly believe#fibro ptnts..

@debdrake … shouldn’t feel guilty for trying/relying on them, if they work. Yet that’s the msg we’re constantly bombarded with.

@SherrieSisk I hope I dont come across as anti meds. I dont talk about meds. Im not an MD. I’m an ND so only talk about natural alternatives

@SherrieSisk Im def not trying 2 make any1 feel guilty about anything. U have to feel good about what u are doing 4 it to help & not harm u.

@SherrieSisk Fibromyalgia is very much tied in to our emotions and feelings. Choosing a treatment should not be based on fear.

@SherrieSisk I know that many don’t want to use chemicals and so are looking for how to reduce symptoms without meds. I am here for them.

@SherrieSisk Ur right about just trying to use one answer for fibro. It wont work. Like I mentioned bf, must be an individualized program.

@SherrieSisk If a person comes to me and says they live a hi stress life, eat fast food everyday, wont sleep at night, etc, & then say that…

@SherrieSisk They want rid of symptoms but don’t want to make any changes. just a supplement 2 fix it. It’s not possible. I can’t help them.

@SherrieSisk If you are happy with your treatment plan and have no side effects or fear of long term issues, then don’t change it.

Then she said something nice about my writing. 😉 I thanked her, and said:

@debdrake I understand completely. I’m not “PRO”-meds – except when they work and are taken properly. I’m PRO-anything that helps.

@debdrake It’s just that for me, I don’t see the proof that alt remedies really work as well as meds, & there’s a TON of bias against meds

@debdrake … that ticks me off, frankly. No #fibro ptnt should B scared away from ANYTHING that works. Alt remedies, meds, yoga, ANYTHING.

My Position on Alternative Remedies and Prescription Pain Medication for Fibromyalgia

Let’s clarify what we’re talking about when we talk about “alternative remedies” for fibromyalgia.

As I use the phrase, I’m referring to nutritional supplements, acupuncture, acupressure, Chinese medicine, massage therapy, Ayurveda … pretty much the world of treatment outside prescription pain medication, surgery, and exercise/physical therapy-based treatments.

I realize some might disagree with me that yoga isn’t really an alternative therapy, but I consider any movement-based program to be in the same ballpark as any kind of exercise, including walking.

I wrote about nutritional supplements, and described my experience with them, on this blog previously. I realize now that I sort of shied away from my true feelings about natural or alternative remedies in that post, and I apologize for that. But there was a reason for my reserved approach, and it’s echoed in my statements to Deb above: I don’t want anyone with fibromyalgia to be persuaded not to try something that might help them.

See, I agree with Deb in a few respects here. Until we have a cure, there will never be one single treatment that works for everyone and every symptom.

One place where I part company with her is in the why: Deb thinks no one thing causes fibromyalgia and that’s why no one treatment will work. I think it’s entirely possible that one thing does cause fibro, although it possibly depends on a more complex mechanism or series of events to really get going.

And with respect to alternative remedies, by and large, we don’t know whether they “work” to either cure, lessen, remedy, heal, or alleviate fibro. We have some evidence, mostly anecdotal, that certain treatments have a beneficial effect more often than others. We have very little empirical evidence, though, especially with respect to nutritional supplements.

Here’s my beef with the whole alternative field: I’ve read a lot of those books detailing the supplementation regimens recommended for fibro, and the regiments simply aren’t practical. I’ve tried a lot of those regimens — the expense coupled with the not-insignificant hassle of taking handfuls of pills every day at different times means, for me, that in order to be worth that hassle, that regimen better produce some impressive results pretty darn quickly.

They never have. For me. Others say that their mileage varied — they believe the regimens worked and they feel a lot better. And that’s great for them.

Let me make this clear, once more: I support wholeheartedly any fibromite’s treatment regimen if it works for you and is safe. Heck: even if it isn’t safe, if you’re fully informed and make a deliberate decision to try it anyway, knowing the risks, then I support that, too, as long as it poses no risk to anyone else.

Where I get irritated is when folks make claims that fibro can be cured by natural means — or frankly, by any means. It can’t. Not yet. I also get irritated when medication is presented as something unnatural — in the sense that it’s bad, or wrong. It sends the message that anyone who chooses medication is somehow weak, or doing the wrong thing, or harming herself.

It’s just not true. I resent it, it gets my hackles up, and it’s dangerous, to boot.

Medication wasn’t something I chose lightly. I looked for more conservative measures for four entire years before I finally agreed to give prescription pain medication a try.

But when I did — when I found what worked for me (tramadol plus acetaminophen) — the change in my quality of life was striking, immediate, and long-lasting. I’ve been on this cocktail for six years now, and have increased my dose only once (three years ago).

Far from being addicted to it, I’m indebted to it, but I take it in order to live my life, not to get high or to avoid withdrawal. I take it, in short, in order to function. It works for me, plus any side effects are minimal and can be managed completely by simply following the instructions for taking it.

Basically, what I’m saying is this: don’t be swayed away from any possible treatment — including nutritional supplements, and – yes – including prescription pain medication — by questionable value judgments placed on the treatment by others. Don’t reject prescription pain meds, when nothing else works, just because people tell you that they’re somehow wrong or objectionable, based on some faulty science or a personal agenda. By the same token, don’t go running to your doctor for tramadol just because I’m saying it worked for me.

And with respect to alternative remedies, I’d love to see some harder science on their efficacy. To my knowledge, only acupuncture has any studies supporting its usage in fibro treatment; it would be awesome to have more options for all of us. All I can do is tell you what worked — and what didn’t — for me:

And, as always, your mileage may definitely vary.

* – (Twebate=Twitter debate. And I promise, that’s the last time I’ll ever coin a “tw”-starting word to describe something on Twitter.)

2 thoughts on ““Twebate”*: Alternative Remedies versus Pain Medication for Fibromyalgia”