The Problem: Wild and Unsupportable Claims About Cures for the Incurable Diseases That Cause Us Pain

Following on my recent post here about a Twitter debate I enjoyed with Deb Drake concerning the various approaches to fibromyalgia treatment, I wanted to write about another aspect of Twitter that’s not so much fun: people making wild, unsupported, unsupportable claims about fibromyalgia (and other diseases) through their tweets. 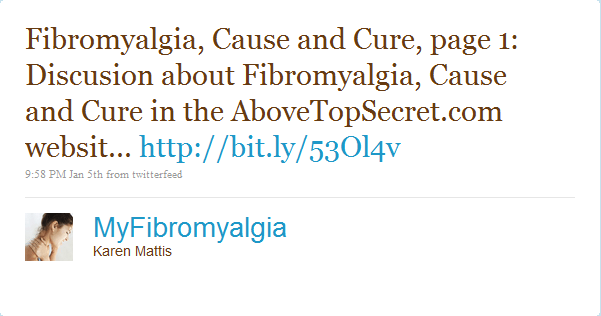 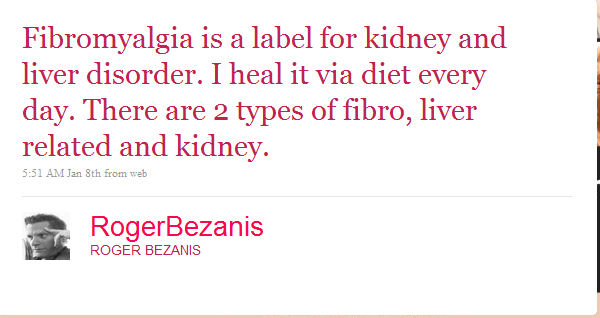 Oh, heck. Just take a look at a real-time search on Twitter for “fibromyalgia cure.”

Why I’m Skeptical of These Claims/Claimants — And You Should Be, Too

Knowing who and what information to trust on the web, whether that’s on Twitter or any other site, is difficult sometimes, I realize.

Frankly, I could adopt the whole “only trust .edu and .gov sites!” line that a lot of internet nannies advocate, but I think that’s kind of dumb. For one thing, the most passionate people involved in illness advocacy, treatment and help are the patients — not the government scientists and university professors with access to those prized domains.

For another, it’s just naive to expect people to rely completely on universities and the government for health information. Both entities are constrained by internal and external rules and fears of liability that can restrict the information they’re allowed to disseminate. Not so with individuals or private groups.

On the other hand, though …

You’ll see a lot of usernames with words like “money,” “affiliate,” and “tweet” in them, and a lot of shortened links leading to posts that claim cures for fibromyalgia are readily available — usually conspiratorially squelched by the Evil Government or Big Pharma, two handy scapegoats which “don’t want” you to have this “valuable” information for their own malevolent or merely greedy reasons.

You’ll also see a lot of folks like Roger up there, who seem sincere (but who also have a vested financial interest in getting you to act on their “advice”). And that advice generally consists of wild claims about diet and supplements, about the evils of “chemicals.”

Does a vested financial interest alone — the mere fact that someone’s using Twitter to make money – render the advice untrustworthy? No, of course not. Anyone who claims otherwise is simply too naive to have a rational conversation with. Rather, it’s just one factor in a group of issues to be considered when you’re deciding whether to trust a piece of information — whether that’s from Twitter or any other part of the web, really.

But here’s my thing: if a website I’m directed to is solely about health, generally — not a particular disease or condition or demographic — and if that website is strictly for affiliate marketing, and if the profile of that blogger tends to suggest his or her purpose is in making money, not helping people with chronic illnesses — then, yeah. I’m thinking this person is someone who signed up for Clickbank or LinkShare, who doesn’t actually have the condition at issue but rather simply wants to make money.

Anything wrong with that? Not at all. Heck, I signed up, too. I can’t work the way I’d prefer to, so this is the way I make money and support myself, in addition to the writing and consulting I do.

Am I going to trust that this person “has a cure” for what ails me – or, for that matter, for what ails anyone else? Not a chance in hell. And if you ever see me making claims like that, then you shouldn’t trust ME, either.

I always find this “chemicals are to blame!” argument a little unintentionally hilarious. Almost always, it’s made in a slightly hysterical tone. Really, what do these folks think the human body is made of?

I think they mean “bad chemicals” — which of course raises the inevitable questions:

So, of course, They urge us to “detox.” Short for “detoxify” — as if all these “bad chemicals” have so laden our bodies, lining the walls of our very cells, and causing all our problems, and all we have to do is give the body a thorough scrubbing in order to rid ourselves of the toxins.

Heck, no less an “authority” than Gwyneth Paltrow exhorts us to “get Clean” by “detoxing” from the assorted chemicals foisted off on an unsuspecting, naive, ignorant public by … well, by somebody (corporations, I’m guessing? Republicans? I don’t know).

The problem with this, of course, is that it’s (mostly) complete bullshit. There is no evidence whatsoever that any kind of “detox” program, regimen, diet, or process will lead to better health. And there is quite a bit of evidence that some of these programs actually cause harm.

Are there legitimate occasions for detox? Sure. Heavy metal poisoning calls for chelation. But unless you’ve been exposed directly to mercury …

At the heart of my admittedly deeply emotional (and that emotion would be anger ) reaction to these quacks and their unsupported claims lies the false hope and inevitable frustration and self-recrimination they generate. First, we get hopeful – hey, something new we haven’t tried yet! It appeals to our innate love of purity and nature, and we think how wonderful it would be if we could just “get clean.”

When it doesn’t work as suggested (and yes, sometimes promised — which is highly unlawful), we’re left with anger, frustration and guilt. Maybe we didn’t do it right. Maybe we’re just so awful — so compromised, so toxic — that it couldn’t possibly work.

Anger, though? That’s a rational reaction to a failed experiment with one of these so-called cures — as long as that anger is directed at the jerk who sold you a bill of goods in the first place.

The other reason all this “cure”-selling makes me angry is that trivializes the illness. Don’t you think that if fibro could be cured with some over the counter pills and herbs that there would be an army of media outlets trumpeting the good news? Don’t you think I’d be right there with them?

Whatever complex mechanism or mechanisms are at work behind fibromyalgia, I highly doubt a handful of powders and spices are going to cure it. Until I see some double-blind studies published in peer-reviewed journals, I’ll pass, thanks.

That’s Me … What About You?

Now, that’s my stand on it.

But if you want to try one of these programs (which They just happen to sell for the low, low price of $197 or whatever for a measly month’s supply), be my guest and I won’t mock you. Promise. I know what it’s like to be so desperate for relief that you’ll try anything — even if it doesn’t make a lick of sense.

Just go into it with eyes open, and for the love of all that’s good in this world, don’t go for one of the regimens that promise to get rid of “parasites” unless you get it from your doctor after a valid diagnosis.