It’s my fervent belief that facts and figures don’t move people to action — stories do.

And every Trauma Doll has a story. Meet one of your sister Dolls in our new feature, “A Doll’s Story,” which we’ll post every so often. Each Story will show you yet one more reason not to lose hope over coping with chronic pain. 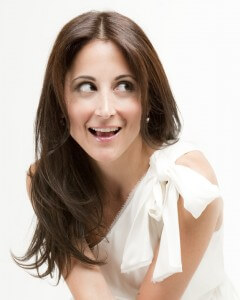 Melanie, I cannot thank you enough for doing this. You and I have been following each other on Twitter since 2009, I think, and I’ve loved observing how you built up SavvyAuntie.com into such a successful lifestyle brand and website. I was astounded when you told me recently you accomplished all this while dealing with chronic pain yourself! Tell us a little bit about your history with fibromyalgia and myofascial pain.

It’s my pleasure to speak with you about my chronic pain and how I’ve refocused my life.

I don’t remember a time when I wasn’t in some sort of pain, even in mild forms. When I was little, I suffered from what they called ‘growing pains’ in my legs. When I got to the tween years, I began complaining about pain in my upper back and neck. My mother’s rheumatologist poo poo’ed it, saying I was probably carrying my backpack incorrectly… but I knew it was something more. But at age 14, what are you going to say? At 16, as growing pains subsided, the pain in my neck grew more intense, but I learned to live with it and take ibuprofen on the bad days.

When I was in my mid-twenties, the pain became unbearable at times. I went to see a sports MD thinking he might be able to help. After about 5 minutes of massage, he pressed on various place on my body which I realized had focused pain. He suggested I might have fibromyalgia and I quickly bought every book on the subject. (This was in the mid 1990s, before the Internet was a natural go-to place for research!) I had 11 of the 18 touch-points associated with fibromyalgia.

While the pain did not go away, the relief that I was part of a community helped. My rheumatologist confirmed I have the syndrom as I also have a (mild) case of rheumatoid arthritis and therefore it’s not unlikely as the two often go together.

In my mid thirties, I went to see a physiologist who said that the intense pain on my left side was myofascial pain (because I had the pain without touch). Around that time, I had complained to my former internist about my pain and described it as a migraine in my back. (He wasn’t a fibro-believer). He prescribed migraine meds which I still take on bad days. They are a gift.

How long did it take you to get a diagnosis, after the symptoms first began showing up?

What’s your current treatment program like? Can you describe what you do regularly to keep chronic pain at a minimum and how you stop it from stopping you?

I take a migraine med called Fioricet (please don’t take anything without your doctor’s approval!) on intense days as soon as I feel the pain coming on. Exercise (20 minutes on a stationary bike and 20 minutes of weight training) helps too. I’ll also treat myself to a 10 minute massage at the nail salon (very common here in New York City) or on those really bad days where even Fioricit won’t help, an hour massage.

April and October seem to be my worst months, so I take ibuprofen on my ‘every day pain’ days.

Since I’ve had pain my whole life, I can’t let it stop me. Now my pain may not be as bad as that of some of your readers, or it may be worse than others. But for me, focusing on pain feels like defeat. What a downer! So I focus on success instead. In fact, I rarely talk about pain and have since thrown out all those books I bought on fibromyalgia. I just don’t like the painful energy in my home.

One of my biggest pet peeves is the way a lot of us with chronic pain — particularly those of us with chronic fatigue and fibromyalgia — are met with suspicion right out of the gate by so many in the medical profession. Have you ever experienced that? How did you deal with it?

Yes, as I said above, some of my doctors didn’t believe my pain. The first, when I was young, had diagnosed my mother with Lupus, one of the first in Canada. He was a good doctor. I think my young age is what fooled him and I don’t blame him. Besides, it was the 1970s and fibromyalgia was not a known diagnoses.

The second was an internist I had in my 20s and 30s who never believed me when I knew something was wrong, even saying once I has the stomach flu until I insisted he take blood. I was actually very ill (all better now!). So I learned early on to speak up for my body. She’s mute. I’m not.

I like to encourage myself and others to dream big, but a lot of folks with chronic pain don’t see how that’s possible. I understand that response, completely — dealing with chronic pain is often a full time job in and of itself, and it’s exhausting sometimes just trying to stay well and functional. I think sometimes the way we talk to ourselves about our pain can be one of the biggest obstacles we face. Yet I look at what you’ve accomplished and I have to conclude SavvyAuntie.com was a HUGE dream, and there you are, living it every day. What kind of self-talk did you have to change or develop in order to keep yourself on track with this big dream?

Pain will not defeat my dreams. And in fact, focusing on building a business I love has quieted down the pain because I have so much else to focus on.

A lot of women with chronic pain have a very hard time making ends meet financially, and one possible solution is self-employment or entrepreneurship. What advice can you give Euston Arch’ readers who are interested in exploring building their own businesses, in spite of their chronic pain?

My chronic pain is manageable. For others, it may not be. So for me, it was never an issue as I’ve had it my entire life and it’s never stopped me. That said, in 2005 I woke up numb on one side of my body and later learned it was a symptom of the onset of Multiple Sclerosis.

I was working in corporate America under a lot of stress and aggravation. Instead of launching a Website that summer, I was in the ER trying to understand why my body was numb.

While my neurologist says that stress has not proven to be the culprit of MS, I knew that one type of stress, “aggravation,” often brought on symptoms and am not surprised that during that time at my job, MS came knocking and said: Ready or not, here I am! (By the way, all of the challenges I have are likely all autoimmune issues and are probably related in some way.)

All this to say that while having one’s own business and investing one’s life’s savings in it is stressful to say that least, I don’t have aggravation. My symptoms for all challenges are lessened because I can control my aggravation levels better than when working with people that don’t offer me the solutions I believe in. Being in control of who I work with and the situations I work under to a greater degree means I can control best what creates pain or weakness – not all the time – but more so.

Bad days happen to us all. I had one yesterday — there was just no way I was getting out of the bed to finish moving out of my old house. What do you do when a bad day hits?

I don’t punish myself for slowing down. I look for ways to focus on things that bring me happiness or calm me (I call or visit my nephew and nieces!). I take something for the pain, go to the gym and/or get a massage. I take a break. I push through. I have no choice.

I hear you’ve written a book — tell us about that?

Yes! Savvy Auntie: The Ultimate Guide for Cool Aunts, Great-Aunts, Godmothers and All Women Who Love Kids (Morrow/HarperCollins) is being released on April 26th! It’s based on my Savvy Auntie lifestyle brand, the first for the nearly 50 percent of American women who are not moms but love a child in their life!

What’s next for SavvyAuntie.com and Melanie Notkin?

The book is a huge focus for me and the brand right now… as is continuing to build the Savvy Auntourage. There are 40,000 fans on Facebook.com/SavvyAuntie now, growing daily! And mark your calendar! The third annual Auntie’s DayTM is July 24th, 2011!

Last question! Let’s play make believe. You meet a woman who tells you she’s just been diagnosed with a chronic pain condition. She looks depressed, sounds scared, and seems overwhelmed. What one (or two or three) pieces of advice do you share with her, from your perspective having dealt with fibromyalgia and chronic pain for so long?

Our pain is not terminal. Do not let it kill your spirit either. Keep going!

NB: This interview was supposed to be published on March 15th, and sadly that didn’t happen due to a computer hard drive crash (that would be mine — sigh). I’m going ahead & putting this up, even though the event’s over, ’cause you should still totally buy Melanie’s book and donate to Project Ladybug yourself. OK, thanks!

Melanie is asking all those considering ordering her book Savvy Auntie to please pre-order it Tuesday, March 15 on Amazon.com to help her move the book up the rankings there. Send an email to Book@SavvyAuntie.com telling her you’ve pre-ordered the book because Melanie will donate $1 for **every book pre-ordered that day to Project Ladybug, a fund dedicated to enriching the lives of children with life threatening conditions co-founded by former Bravo Real Housewife of New Jersey, Dina Manzo.