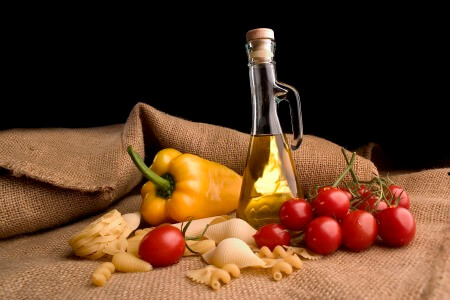 Now, admit it: doesn't that look a wee bit delicious?

“Conflicting diet advice” – can we add that to “taxes” and “death” under the category of “Sucky Things We KNOW We’re Gonna Get”?

It’s become a joke at this point. Some studies say the controversial Atkins diet minimizes cardiac disease risk. Others say it exacerbates the risk. Scientists used to caution us away from eating eggs; now we find out they actually contain a cholesterol-lowering ingredient.

I threw my hands up a long time ago and decided that if the scientists couldn’t figure it all out, there was no way I could either. So, that being the case, maybe it didn’t make a whole lot of sense that one kind of food would be so much better for me than another. Or some other food would increase my symptoms so much more than another kind of food.

Maybe, it occurred to me, just maybe it made more sense to get back to basics …

Mediterranean Diet: The Back to Basics Way of Eating

And that’s pretty much what I found in the so-called Mediterranean Diet.

Right off the bat, I have to caution that there really is no such thing as “the” “Mediterranean” “Diet.” People on a Greek island don’t necessarily eat the same foods as Sicilians. Heck, they might not eat the same things as people living in a Greek coastal village. There is no one list of acceptable foods or foods that you can never eat, no one set of recipes, not even one set of guiding principles that are universally acceptable all over the Mediterranean region.

What we do have, however, is a list of generally accepted principles for what’s come to be called “the Mediterranean Diet.” And it’s a winner, in my book.

For me, this way of eating is terrific because, quite simply, I like the way it tastes. I love the “sensory” aspect of the dishes — the textures, the flavors, the colors. Mediterranean dishes really appeal to every one of my senses.

It’s also pretty darned simple, and that fits the way I generally cook. I don’t like to follow recipes usually. I prefer just adding a few ingredients to a basic “structure” and seeing what comes out. This way of cooking lends itself really nicely to that approach.

Since I’ve been eating this way, I can say I have lost quite a bit of weight, though I can’t attribute that entirely to the diet. More importantly for our purposes, my pain levels have tapered off and diminished in a few key respects. It’s not gone, but I “feel better.” And that’s worth just about any change of diet, in my cookbook.

The general approach is pretty simple: Heavy on the fruits and vegetables, fish and chicken, light on the red meat; whole grains; low-fat dairy; olive oil and olives; and red wine (optional).

There’s no trick here – no super-secret science at work that will suddenly heal your chronic pain, I’m sorry to say. But it is a healthful, balanced approach that will reduce your overall health risks (especially for diabetes and cardiac illness), increase your general wellbeing and energy, and possibly reduce inflammation , which in turn can reduce your chronic pain levels.

Getting Started With the Mediterranean Diet

There’s no need to go buy a ton of new cookbooks, if you want to implement the principles behind the Mediterranean Diet into your own nutritional program.

Start simply and colorfully by choosing whole fruits and vegetables at the local produce market: carrots, colored peppers, broccoli, squash, berries, apples (go for organic if you’re concerned about pesticide use in your area, or if you don’t have access to a farmer’s market or co-op).

Add some olives. I love kalamatas, but there are several delicious varieties available at most chain groceries. Get a good-quality olive oil, while you’re at it. Cook with it (watch carefully and make sure it doesn’t hit the smoke point before you add in your meats and veggies) and add it to salads with some balsamic vinegar for an awesome and cheap salad dressing.

Rely on non-farmed fish and chicken, with an occasional dish including red meat (experts recommend twice a month or less, though I confess I eat it more often – more like once a week). Do a meatless meal once or twice a week; use beans and pasta to supplement veggies. Experiment with various spices – basil and oregano are my two go-to favorites – and garlic, which has some antibacterial and anti-inflammatory properties.

Now, about that wine … many iterations of the Mediterranean Diet recommend a daily glass of red wine, which some studies suggest reduces the risk of cardiac disease. Other studies suggest that it might increase inflammation. What’s a poor Doll to do?

Personally, I skip the wine because I take prescription medication. If you’re not taking medication, or at least not taking medication that’s contraindicated for alcohol consumption, you might want to try it once in awhile. I have to say, I do miss that occasional glass, even though I was never a big drinker. (Pause while all my college friends stop laughing…) But stick with just one a day, no more.

Resources for Further Reading on the Mediterranean Diet

If you want to experiment and play with these principles, I encourage you to check out two cookbooks that I’ve particularly enjoyed.

One is called The Mediterranean Prescription: Meal Plans and Recipes to Help You Stay Healthy for the Rest of Your Life

by Angelo Acquista, M.D. (affiliate link). This book is more geared towards weight loss than general health, and it’s got a definite Sicilian bent. But whether you’re aiming to lose weight or just get healthy, the recipes are amazing.

The other is called simply The Mediterranean Diet

(affiliate link), and it’s coauthored by Marissa Cloutier and Eve Adamson. It’s strong on nutritional information and also contains a seven-day meal plan suggestion, as well as a little exercise program you can try (though it might be unsuitable for chronic pain patients).

You can also take a look at the following links that I can personally recommend:

Buono appetito, and here’s to your health!